We love Girls. You know this already because we blabbed all about it last week here.

This past Sunday’s episode, “Bad Friend”, was a little bananas. I, for one, did not foresee Hannah being the type to hit the nose candy – heyo, curveball. Totes thought she’d be too straight-laced/pious to take that plunge. But, who knew? Editor “Jame” (not Jamie) said to, so she literally did it for the story. And out of it we got the sweaty mesh tank top dance scene between her and Elijah set to the best song ever (below).

How’s that jam? Makes you want to SHAKE IT EVERYWHERE. Like everywhere. I don’t care, I love it.

-5 for that illegal mesh tank top. No club would ever allow it. No friend would allow it either. This isn’t Ibiza, it’s Brooklyn. It’s not cocaine-induced expressionism, it’s assault on my eyes, and an infraction that would land real life people in the pen.

+5 for her Marnie tell-off rant. It was fun and true and weird.

-5 because umm, nobody in the world would react the way Hannah did if your creepy-junkie-downstairs-neighbor started stalking you. Even if you had asked him for a favor earlier that day. No, you’d mase a bitch.

+10 for just having all around incredible charisma and screen presence. Such a great character addition. I’m giddy during any scene in which he is present.

-10 for letting Hannah wear that illegal tragedy of a mesh tank top. 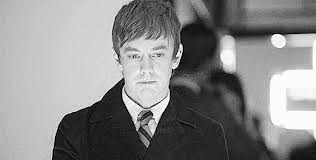 +10 for unheard of levels of cockiness. I’ve been harboring high hopes for Booth based upon his introductory scene with Marnie from last season. I won’t remind you of what he said exactly because my mom and dad read this and they’d send me a howler. But, dear readers, I was PSYCHED when he and Marnie inevitably met again…and impressed that he instantly lured her away from her brand new job with just a few lethally casual words.

-10 for that AWFUL sex scene. God, I pictured it going down so differently. Way to make it not hot at all, deranged-artist-Booth. You were supposed to just stay at cocky-artist-Booth.

-10 for that awful sex scene. Marnie was a lifeless slug without a soul letting some skinny robot man inhabit her. I can stand my share of spice, but Jesus Marnie, where’s your fighting spirit? Or even your words? Your personality? Your exaltations? Your protests. Perhaps this will be the catalytic moment for a new arc about her emotional evolution or some shit like that. Or maybe she will end up dumping his brazen hipster ass. Either way, we need something else to happen.

-10 for her “You are so f-ing talented” response to him locking her in his torture TV installation. Get your head out of your ass, Marnie.

+10 for the imminent unraveling that will befall Jessa’s supposed union to Thomas John. We all know it’s coming. Jessa’s obnoxious proclamations about domestic nirvana are just a setup for the implosion.

…Can’t wait for Sunday. They better not try and pull any shit because of Super Bowl or anything like that. Do you think Hannah will actually make Elijah move out? Noooo, I hope not.