It’s been awhile, I’ve barely seen Clair. She’s been running around this loveless city like a mad man doing her comedy and drinking in every bar south of 14th street as you guys know she likes to do. I really think a boyfriend would be good for her. Maybe it would make her slow down, have a dinner at home once in awhile, cure her exhaustive and yet simultaneously un-satiated sexual appetite. I think it could make her more pleasant on the whole. I don’t mean to say that a woman isn’t complete without a man, but really one must be mindful that youth is fleeting. Anyway, what do I know, I’m just a serious writer and journalist with my life together (and a conventionally successful boyfriend)  – ha ha ha, is it condescension if it’s true my darlings? I don’t mean to brag but my savings account has become really impressive and I’m doing spin class upwards of four times a week these days (even when I’m tired (!)), Clair could stand to listen to me re: a few things. 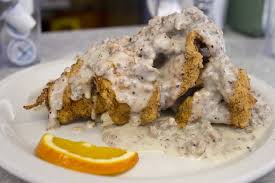 Comfy Chicken from Homegrown in ATL

Clair: How’s your book coming along?

Blair: Did you even read my long-form piece about Ted Cruz and comedy in Salon?

Clair: No, why would I read Salon? I don’t cower to that pedantry garbage.

Blair: You’re terribly inconsiderate of people’s feelings. Also, I’m on to your subtweets, don’t think I haven’t been reading them. “So weird when your writer friends get sticks up there asses the second they get a byline”- not cool, Clair. How was Atlanta? Did you find new vegans to shame?

Clair: I didn’t shame any vegans. Atlanta doesn’t have vegans, it’s a hearty and respectable town akin to old shoe leather. The bloody mary’s come in monstrous buckets – like fish tanks of delicious food-laden poison. Bacon, croutons, and a garden of vegetables spilling out the top, audacious but without pretense. You need a fork. They were strong but I got an extra shot of vodka in each to be sure, not trying to get soft. Atlanta’s charming as hell.

Blair: Clair. You need to cut down so you don’t end up like Charlie Sheen, you’re a lady. Your blood pressure – with how much red meat you eat – Spring is almost here you know. I wouldn’t say these things if I didn’t care about you. Thin is still in.

Clair: Boy, did I have some drinks down there. My head swelled up like a basketball by day 2.

Blair: Did you meet any nice Southern men that were kind enough to overlook your truck driver habits and general personality?

Clair: I met this one guy, Ted.

Blair: Ted! That’s great, what does he do?

Clair: Who cares? Did you know meat sweats are real?

Clair: Yeah, come to think of it, I never asked what he did.

Blair: What did you like about him? Was he hot? Over 6 feet tall I hope.

Clair: Hot, yes. Good looking, no. Not over 6 feet tall, but he had je nais se quois up the wazoo if you know what I mean.

Blair: No, I haven’t the faintest idea of what you consider “je nais se quois” to be.

Clair: Not boring. Not a lame, not a vegan. Not a cheesedick. Not super conventionally good looking.

Blair: You genuinely disgust me.

Clair: I have to go watch “Going Clear” now.