Okay, this is the scene. It was a 32 degree Thursday morning with formidable windchill. I awoke in my East Village bed, a warm womb of denial to start the day. My alarm sang abrasively, demanding like a naggy ex-wife that I get up and move my ass. Never having been a work-out-before-work type, I hadn’t exercised at this hour since the yesteryear of college athletics where my successful arrival at early morning practice was attributed solely to the threat of punishment by death (ie: running stadiums or game suspension). And that’s when I remembered that today was the day of me against the bike, but mostly just me against the morning in general. 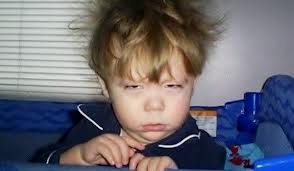 Selfie I took from bed

I managed to blindly shuffle along the streets of New York city until I made it to the SoulCycle studio in NoHo, gingerly led along by my valiant leader roommate. Armed with her disciplined can-do attitude, she paid no mind to my cantankerous protestations. I signed in and after noticing the “New Rider” marking next to my name,  I was greeted with a: “Welcome, Blair. We’re really glad you’re here today.” I smiled even though it sounded like the greeting people get when they first check into rehab for narcotics. It was a nice touch though, I felt welcomed and shit. And then after overcoming the acute claustrophobia of the miniscule winding locker room hallway, I arrived at my bike – my foil, my stallion.

Clad in my stupidest dryfit apparel and batman velcro spin shoes, I was ready to see what all the god blessed hype was about. Why Jake Gyllenhall never misses a class, why even Aviva, real housewife without a leg, partakes. The room was dark and I felt the same eerie sense of anticipation that is present before the headlining act of a concert comes on. People were jazzed all around me. At 6:45 in the morning. What is wrong with these people? I thought.

Our instructor arrived with one minute to spare, assuring us all that she always starts precisely on time. She introduced herself as Stevie. A diminutive little hobbit of a person, she had the preternatually lean and sinewy muscle of a feline cat indigenous to the wild plains of Africa. There was no evidence of even the smallest bit of fat on her body. We’re talking size 0 in a sports bra and micro spandex shorts with more energy than a Four Loko. In addition to the full tattoo sleeves encompassing her arms, she had a massive pony tail of dreadlocks and eyes the color of mint Listerine. It seemed as though she was probably friends with Michelle Rodriguez. What an interesting person, I thought. Stevie quickly lit candles around the now packed room and we started peddling.

The music came on and blared 25 times louder than any other gym class I had been to ever. I started to loosen up and remember that I was a dedicated athlete at some point in my life. This morning shit isn’t so bad, I thought, I’m like almost partying kinda. Stevie yelled like a rockstar on stage from her front and center platform. She was a spiritual artist and it seemed that with each passing scream she gave away a part of her soul to us. I wondered if she was a sobered up former raver as I struggled along with each song (you’re supposed to peddle to the beat).  I chased the music through the entire ride. Going after the intangible could be frustrating but it was also liberating, like a midnight skinny dip in the ocean. And then we did choreographed little tiny dance movements on the bikes and Stevie jerked her dreadlocked head back and forth like a possessed mad woman – everyone looking to her like the hero goddess of the morning. She was a savant of energy, a defiance of normal human limits. We even did a ten minute arm sequence with one pound weights while peddling, an activity that left my arms paralyzed for the next four days. For our cool down ride, she ended with some Etta James in the darkness. It was ethereal in the candlelight and felt a little sacred like a little chapel oasis. 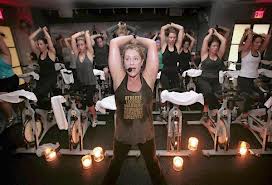 See, I was telling the truth about the candles

Needless to say, I get it now. SoulCycle is that good, everything they said was all true. It will get you from the inside to the out, from the toes to the nose. But it’s also for the richest people in America at $35 a class. Basically, I can never go back until I am rich and famous. So, thanks, SoulCycle, I love you and see you never.

Have you tried SoulCycle? What do you think?