Today, dear readers, I beckon you down the rabbit hole into a Cambodian world of gluttonous pleasure. That’s right, I’m talkin about Num Pang on E. 12th Street in New York.

I’d heard loud whispers about this little crevice of a sandwich stand for several months before I finally made the good decision to carve out time and try it. Then one Saturday, I woke up and said to myself, TODAY’S THE DAY FOR ME AND THIS SANDWICH. I last minute texted a few friends to see if anyone else wanted to dive into Cambodian legend alongside me, but nobody took the bait. A lone and curious soldier, I walked the 15 minutes from my apartment over to Union Square. 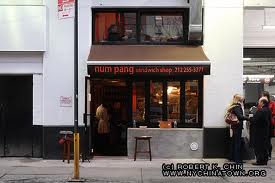 Sweet little Num Pang. Don’t blink cuz you could miss it and then your life will be ruined forever.

The menu included an array of exotic sounding options like Pulled Duroc Pork, Peppercorn Catfish, Ginger Barbeque Brisket, Grilled Khmer Sausage, Portobello, and several other equally compelling choices. I asked if there’s a crowd favorite and was directed towards the brisket..so naturally I went with the Five-Spice Glazed Pork Belly instead cuz I’m a G. My cashier then pointed to the “Cash Only” sign and gave me a 7% annoyed “ATM’s across the street” as she looked to the eager customer behind me. AHH, thwarted again! But I pressed on. Once I returned with fresh bills, I finally was able to get a Pork Belly sandwich into my grubby little meat hooks. 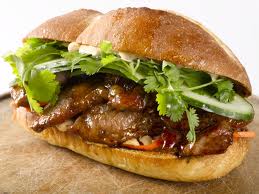 OH MY GOD I WANT IT RIGHT NOW

What followed was a big bundle of joy full of sweet crispy pork belly, cucumber, pickled carrots, cilantro, and spicy chili mayo smothered on fresh house made bread. A perfect melange of wildly opposing flavors and textures meeting in one sickly magical moment of communion. Who could have predicted that something like this existed in the world (except for the legions of loyal fans)?!?!? As I sat there on a park bench, alone, in pure disbelief at the sensuous pleasure of each bite, I thought about how this moment of celestial beauty could be a check mark in the case for a higher power.

While the extra chili mayo dripped into the styrofoam container on my lap, I also contemplated about how unfair I’d been to mayo throughout my life. I realized I’d been socialized into thinking that mayo was an abomination on earth and I’d accepted this idea without even venturing to know it on any sort of intimate level. I’d unknowingly been a mayo racist and now the whole world was being illuminated and cracked open for me in a joyous hedonistic sauce. Amidst the shame of my ignorance and weight on my conscience, I felt a tidal wave of love for this new crack dressing, and forgiveness radiated.

…And then I became a creepy Num Pang social media participator…also, the author notes that she went a third day following these two consecutive days but was too embarrassed to compose another sycophantic public tweet about it (after all, she is single again).

Num Pang, oh my God. Go now. Don’t walk, run there. You will thank me later cuz your first bite is gonna make you feel as though you are only now being born and have never existed before this moment.