It’s MLK day so of course we need to talk about Megan Fox in Esquire Magazine. 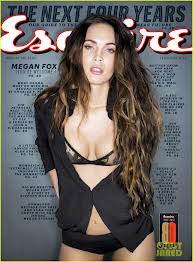 This article is a lot of fun for all as there is a truck load of crazy going on. In addition to Megan Fox jumping through hoops to sound as looney tunes as possible, we also have sycophantic writer, Stephen Marche, in the mix.

Let’s start with Marche. He compares Fox to an Aztec sacrifice, a thing so beautiful that the world has impulses to destroy it. AND SHE AGREES WITH HIM.

“Deep in her house, Megan Fox and I are discussing human sacrifice. I tell her about an Aztec ritual practiced five hundred years ago in ancient Mexico during the feast of Toxcatl, when the Aztecs picked a perfect youth to live among them as a god. He was a paragon, beautiful and fit and healthy, with ideal proportions…

“The sacrifice’s year was filled with constant delight, I tell her. He danced through the streets adorned in luxurious clothes given to him by the master, decked in flowers and incense, playing magical flutes that brought prosperity to the whole world. He had eight servants and four virgins to attend to his every need and could wander wherever he pleased. But at the end of the year, when the feast of Toxcatl came around again, the perfect youth had to smash his flutes and climb the stairs of the great temple, where the priests would cut out his heart and offer it, still beating, to the sun.

“Megan Fox is not an ancient Aztec. She’s a screen saver on a teenage boy’s laptop, a middle-aged lawyer’s shower fantasy, a sexual prop used to sell movies and jeans.

‘It’s so similar. It totally is,’ she says quietly.

At the end of the year, the beautiful youth had to go up by himself. He had to go up willingly. That was part of the deal.

Now she is shaking her head. “Not everyone understands that that’s the deal,” she says.

Megan Fox will not go willingly to have her heart cut out.”

Okay, bro, let’s tone it down about 7,000 notches. I think your austere historical references might be a touch heavy handed. But, the absolute most awesome part is that she unabashedly agrees with him. “Yes, Stephen, I’m too beautiful. I am exactly like an Aztec sacrifice.” 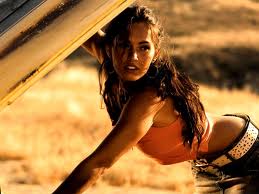 And just a few Megan gems for you to sink your teeth into:

Megsies on her ability to speak in tongues.

“The energy is so intense in the room that you feel like anything can happen,” she said. “I have seen magical, crazy things happen. I’ve seen people be healed. Even now, in the church I go to, during Praise and Worship, I could feel that I was maybe getting ready to speak in tongues, and I’d have to shut it off because I don’t know what that church would do if I started screaming out in tongues in the back.”

Meggy on her preference to confrontations with fictional monsters over a trip to the cinema.

“Would you not be so much more interested in finding out that Big Foot existed than in watching a really good movie? I believe in aliens…Loch Ness monster—there’s something to it…There’s the Bell Witch…What distracts me from my reality is Big Foot. They are my celebrities.”

This article is just a great time all around.

Hey, Megan, you should go have a soda with Suzanne Somers.

What To Do After a Breakup
Robert Redford and Paris Hilton at Sundance
Tweets by @blairsocci
Load More...Follow on Instagram