I Took A Greyhound Bus To New Jersey

I took a greyhound bus to New Jersey the other day. This is because I live in New York and don’t have a car.

And also because I’ve made poor choices and am not a rapper or trophy wife or professional wrestler like I should be and therefore do not have any money.

Artists take greyhound buses. See, I am one. All you have to do is say it, nobody can take away a self declaration you guys. 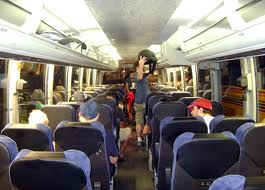 It was on a nice Wednesday that Christina (character of best friend extraordinaire) and I boarded our multi-wheeled chariot in pursuit of a wild 4th of July on the Jersey Shore (***this was not our first bus trip, just simply the most notable as of late). We had the excitement and adventure of that Sex In The City episode where Carrie wrangles Samantha into a cross country train trip to her book party in LA. Except we were only going three hours away.

Everything started off smooth. Before it became not smooth.

We had traveled for a mere thirty minutes, barely entering the state of  New Jersey when the skies started rumbling with anger. Within a few seconds, we were in the middle of a flash flood on the turnpike. Ordinarily, this would just make for a slower ride. But not on this day, dear readers. 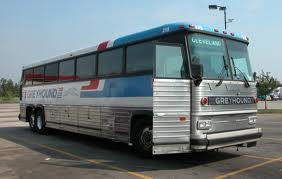 It was discovered by our surly bus driver, that the windshield wipers on our beloved perambulator were in fact busted. And this was only observed after the homeless man sitting in the seat directly behind us started screaming that the roof was caving in. Since he’d been yelling for most of the ride, it took the whole bus about four minutes before we realized that he was actually telling the truth about the onslaught of water on his head. There was literally a waterfall leak pouring in from the roof everywhere.

I’m 75-years-old man! Gimme another seat, it’s rainin’ on my goddamn head, GODDAMN-IT-IS-RAININ-ON-MY-HEAD! What is an old man sposed to do. IT RAININ ON MY HEEADDDDDD!

But he didn’t look 75. I just want to tell you guys that. He looked more like a strong 50. So he got up and ran to the front of the bus and sat next to the driver. This was a relief for us. Because we were very close to him and his yelling.

Then our bus driver started yelling at us that we had to sit on the side of the road until another bus came to pick us up because he refused to lose his job “just to get us to our destination on time”. EVEN THOUGH IT ONLY RAINED FOR A TOTAL OF TEN MINUTES and we actually didn’t need windshield wipers any more. The man really channeled his anger towards his passengers.

So while we waited for our rescue bus for two hours on the side of the road with our phone batteries dangerously approaching dead, we were then treated to our old homeless friend’s philosophical musings. He commandeered the front of the bus, taking it hostage as his stage, while we all sat listening as his (literal) captive audience:

You guys are lucky I’m here fo yo entertainment. You guys hungry? I got crab salad and egg salad in my backpack for you. You don’t have to pay nothin for it. I also got a bottle of sneaky sneaky. Don’t tell nobody but I got the Hennessy in there if ya’ll want some.

Nothing like some unrefrigerated crab salad/egg salad washed down with some Henny.

But this ride was all very good for Christina and me because it made us feel way less white and suburban and inexperienced.

The 4th
An Update on Clair
Tweets by @blairsocci
Load More...Follow on Instagram