Look, we saw you and your side-of-the-head-buzz-cut at the courthouse with Breezy, supporting him at his probation hearing and blah blah.

A litigious matter of whose Grammy night origins we haven’t forgotten. By now you’ve made it very clear that you don’t give a fuh, ie: your Instagram moniker, “BadGirlRiRI” and your daily selfies of you lighting a fatty J. We get it, you’re not Pon De Replay girl any more – you’re no role model. I’ve noticed you taking this stance in some of your most recent song titles like “Good Girl Gone Bad”, “S & M”, and for sure “Rude Boy”. 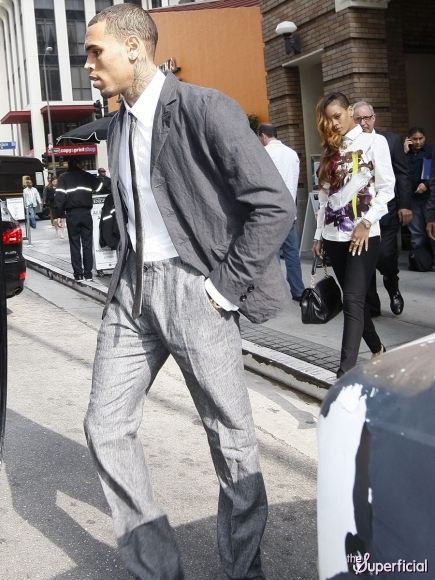 For the record, we abhor it when people give us unsolicited love advice, like it makes us want to assault their houses with a paintball gun and pour salt on snails. But this isn’t about us, so lets get some things straight- You’re a firing Barbadian siren hit factory with the ethereal ability to make even a curmudgeon like 2013 Chevy Chase dance…You got a body that make a girl wanna sin…You’re churning out product like IBM in the 90’s, you can’t be stopped (thanks by the way for “Take Care” and “We Found Love” this past year, two ubiquitous melodies on the soundtrack of my last relationship – now I have to tase myself seven times a night at the club).

But I digress, what I’m saying is – you’re putting some good shit out there in the universe. You need to dump his excitable ass. 2013 can be like Girls’ Year for us!!! We can go hang out with Katy Perry, prob go to some weird clubs in Midtown and Meatpacking like you like to do. Nevermind, Katy is in love now, soldier down. It can be just us two. We can talk about how “Disturbia” is undisputedly your best song and I’ll knife anyone that says differently. Ya know?

And then ideally, we’ll find ourselves a couple of Dwight Shrutes I think. It’s essential that you step outside of your typical box and/or “type”. Maybe Manu Ginobili? No, he’s married. How about Paul Ryan? No, he’s also married. You two would also maj fight over your Instagram choices. Anyways, I think your next boyfriend should dislike MMA, fighting, punching Frank Ocean, yelling at talk show hosts, etc. But that’s just little old me, your friend speaking.

So, write back when you’ve pulled the rip cord.