Okay, so as you guys may or may not know, Clair has had strep throat all week which has made her all the more insufferable. I asked her how she got it and she responded with her usual crazy ass, arcane prattling – something like, “I did a buncha real bad shit this weekend and I guess the goddesses didn’t cosign on this bitch cuz I woke up and it was like I’d swallowed a duffel bag of Mexican switchblades.” As always, I genuinely had no idea wtf she was getting at – but with Clair, sometimes I know better than to press on about questions I don’t want answers to.

So, then she tells me about a random Facebook message she got and launched into this whole thing about how she “can’t understand how these megalomaniacal, chatty-ass mongoloid civilians who don’t have the nuts to make anything themselves SRSLY never fail to flap their malignant traps at artists everywhere” (as you might recall, Clair is a standup comic). I mean, obviously Clair is maj insane, but when she very earnestly and self-referentially used the word “artists”, I laughed and heaved with my whole chest and torso, I didn’t give a shit if it made her mad. Cuz ew, it’s so assholey when people refer to themselves as artists with complete and unsmiling solemnity, right. That’s like calling your self hot or very smart. I mean I know standup is art or whatever but really how many dick jokes can come out of a white, monosyllabically named woman? And then Clair texted me this screen shot with the accompanied rant: 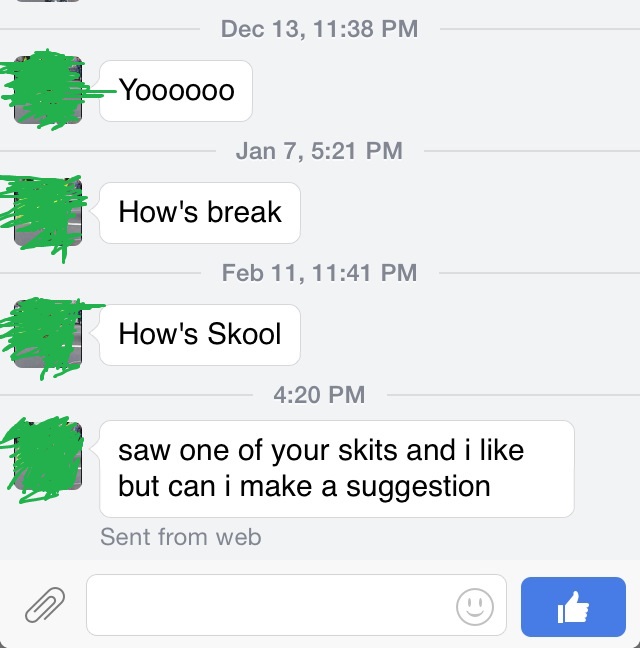 Clair: “A random civilian banker whom I don’t even know just sent me that.”

Clair: “Ya, see the guy calls standup ‘skits”. WTF is he trynna give me “tips”. It’s like go back to your cubicle and cap rates and bottle service, bro. You’ve never even done standup, where the shit are you getting this undeserved confidence from?”

Clair: “Don’t you find it very peculiar, Blair? How people can simply acquire that Jersey Shore Cast Member type of confidence and just message someone they don’t even know with ‘notes’?

Me: “Maybe he’s just trying to dispense some MUCH NEEDED erudite feedback.”

Me: “Just sayin’, shitbrick, maybe you wouldn’t have to eat dollar pizza every day if you weren’t such a shrew to every guy in a dif tax bracket than you.”

Me: “Ya sure…and why aren’t you telling this guy to shut up like you so casually do to everyone else???? You love cyberbullying people, it’s like your favorite thing! So really I think you have no right to get mad at such a politely offered ‘suggestion’.”

Clair: “Wrong! I only cyberbully my friends!!! I would never choose to acknowledge someone I hate or message someone I don’t know, that would be insane!! koo koo kachoo!”

Clair: “…If I may switch gears and be vulnerable for a second with you, Blair…”

Clair: “Well, I just put so much of myself into this you know…I draw my material from the depths of my solar plexus, I extract it…”

Clair: “TOO SCARED TO RESPOND TO HIM, DEEPLY AFRAID HE WILL SAY SOMETHING TOO REAL AND MY ENTIRE EMPIRE WILL INSTANTANEOUSLY TOPPLE IN ONE FATAL TSUNAMI OF TEARS AND SADNESS.”